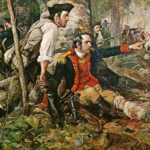 One of our speaker’s ancestor is Captain Diel Rockefeller who served in the Revolutionary War as an officer in the Albany County NY Militia. In 1777, Diel Rockefeller and the Albany militia, serving alongside of Morgan’s Rifleman, at the Battle of Saratoga, played a critical role. From 1778 through 1781, Indian battles evidence the important role the New York frontier played in the Revolutionary War. In 1780, Rockefeller and the militia was at the battle of Klock’s Field, one of a dozen battles and raids by the Mohawk Indians under Chief Joseph Brant and Sir John Johnson in the Mohawk Valley in retaliation for the Sullivan’s Expedition the previous year.

Join us on Monday, October 28th as we welcome Robert E. Sheridan who will be speaking about Captain Diel Rockefeller and the Albany Militia: Victories at Saratoga and in the Mohawk Valley .  Our meeting place is at Scoogi’s  Italian Resturant at 738 Bethlehem Pike in Flourtown. Feel free to arrive early and eat in the back room where our meetings are held.  A short business meeting will start around 7:15pm. The presentation will start at 7:30pm. We encourage you to join our membership for the very small and reasonable tax deductible amount of $30.  Don’t forget to our book raffle too.  Each meeting we raffle off a number of American Revolutionary themed books.  You can purchase tickets for the book raffle, $1 per ticket, or $5 for 6 tickets.  They money raises goes to pay the room fee and speaker expenses.

2 Responses to “October 28, 2019: Captain Diel Rockefeller and the Albany Militia: Victories at Saratoga and in the Mohawk Valley”