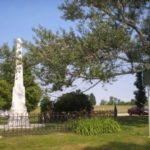 British and German troops ran into stubborn American resistance in Hubbardton on July 7, 1777. After nearly four hours of intense fighting, Crown forces would win the day, but this contest would ultimately contribute to turning the tide for the Patriot cause.

In the fields and hills around Hubbardton, a tenacious American rear guard of about 1200 men derailed British Lt. Gen. John Burgoyne’s plan for a quick march to Albany. Hubbardton was also the first close action heavy fighting between a combined British and German expeditionary force and the American northern army during Burgoyne’s campaign, a plan which had three British armies converging on Albany to split the Colonies by controlling the Hudson River.

Join us on Monday, May 20th was we welcome Dr. Bruce M. Venter who will be speaking about his book The Battle of Hubbardton: The Rear Guard Action that Saved America .  Our meeting place is now Scoogi’s  Italian Resturant at 738 Bethlehem Pike in Flourtown. Feel free to arrive early and eat in the back room where our meetings are held.  A short business meeting will start around 7:15pm. The presentation will start at 7:30pm. We encourage you to join our membership for the very small and reasonable tax deductible amount of $30.  Don’t forget to our book raffle too.  Each meeting we raffle off a number of American Revolutionary themed books.  You can purchase tickets for the book raffle, $1 per ticket, or $5 for 6 tickets.  They money raises goes to pay the room fee and speaker expenses.

Burgoyne’s Redcoats won a tactical victory, but they suffered precious, irreplaceable losses. Patriots under Col. Seth Warner, 34, with his Green Mountain Boys along with troops from New Hampshire and Massachusetts left the British and Germans bloodied, but in control of the field.

Three months later, again after more heavy fighting, Burgoyne and his weakened army surrendered at Saratoga on Oct. 17, 1777, paving the way for a French alliance. Burgoyne’s defeat at the hands of a “rabble in arms” would eventually usher in American independence four years later at Yorktown.

After capturing Fort Ticonderoga and Mount Independence on Lake Champlain on July 6, with nary a shot being fired, Gen. Burgoyne ordered a pursuit of the retreating, demoralized Continental Army under Maj. Gen Arthur St. Clair.

Burgoyne penned an excited note to the Secretary of State for the colonies, Lord George Germain claiming that he would be at his objective, Albany in a matter of weeks. When King George heard the news, he shouted at his wife, “I have beat them! I have beaten all the Americans!” A few months later his tune would change.

Crown forces under Brig. Gen. Simon Fraser, 48, were dispatched after the fleeing Americans over the Mount Independence-Hubbardton military road, while Burgoyne pursued another contingent down Lake Champlain to Skenesborough (present-day Whitehall, New York.)

About 850 Redcoats under Fraser, representing the flower of Burgoyne’s army, elite grenadier and light infantry battalions departed from Mount Independence before dawn on July 6. In his haste, Fraser marched without artillery, extra ammunition or food (except what was carried in the soldiers’ haversacks.) Surgeons and medical supplies were also left behind.

Fraser would be followed by 1,100 Brunswickers, hirelings from German principalities under Maj. Gen. Baron Frederick von Riedesel, a veteran of the Seven Years War in Europe.

As St. Clair’s rear guard commander, it was not Warner’s intention to fight a battle with the pursuing British at Hubbardton. But he thought it best to rest and feed his stragglers, disabled men and his Continentals overnight, then march first thing the next day.

At dawn, however, on July 7, American pickets fired on the advancing British column. Fraser immediately deployed his troops. Warner would have to stay and fight

Dr. Bruce M. Venter is president of America’s History, LLC, a tour and conference company best known for its annual conference on the

American Revolution. He is the author of The Battle of Hubbardton: The Rear Guard Action that Saved America. Bruce is also 1st vice president of the American Revolution Round Table of Richmond and frequently lectures on the Revolutionary War, including at Fort Ticonderoga’s American Revolution Seminar. He is also known for his character portrayals of General John Burgoyne and Charles Earl Cornwallis.  Venter holds a B.A. in history from Manhattan College, and a doctorate in educational administration from the University at Albany.