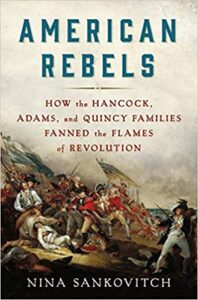 Everyone recognizes John Hancock’s signature at the bottom of the Declaration of Independence but Nina Sankovitch’s American Rebels explores for the first time the family and community connections that led to it. Sankovitch examines the intertwined lives of John Hancock, John Adams, Josiah Quincy Jr, Abigail Smith Adams, and Dorothy Quincy Hancock, and argues for the distinct roles each played in fomenting revolution. Their trajectory from loyal British subjects to American rebels was forged in childhood; and their deeply held convictions, founded in community, fueled their collaborations during the fraught and violent years leading up to the signing of the Declaration of Independence in July of 1776. Sankovitch presents in vivid detail, backed up by extensive and new research, the ties that bound these men and women together (including faith, love, ambition, and envy) and drove them to rebel against England, while also demonstrating how the desire for independence cut across class lines, and how families could be divided, rebels versus loyalists, in pursuing commonly-held goals of opportunity, liberty, and stability.

Nina Sankovitch has lived an interesting life. She graduated from Harvard Law School. Many years later, after the death of  her older sister due to cancer, she dealt with her grief by reading a book a day for a year, and reviewing the books on her blog. This experience led her to write her first book, Tolstoy and the Purple Chair: My Year of Magical Reading. She followed that up with Signed, Sealed, Delivered: Celebrating the Joys of Letter Writing, a subject for which she also gave a TED Talk. Her third book was her first full-scale foray into history, The Lowells of Massachusetts: An American Family. Her fourth book, which is the subject of her presentation, is American Rebels: How the Hancock, Adams, and Quincy Families Fanned the Flames of Revolution. Ms. Sankovitch’s latest book is also available on Amazon. A meeting invitation with link will be sent out to members a few days before the meeting.

You can purchase Ms. Sankovitch’s book using this link:  https://www.amazon.com/American-Rebels-Hancock-Families-Revolution/dp/1250163285