The speaker for this meeting is author Dr. Holly A. Mayer and she will be talking about her book Congress’s Own: A Canadian Regiment, the Continental Army, and American Union 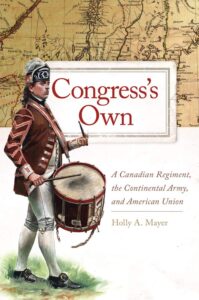 Colonel Moses Hazen’s 2nd Canadian Regiment was one of the first “national” regiments in the American army. Created by the Continental Congress, it drew members from Canada, eleven states, and foreign forces. “Congress’s Own” was among the most culturally, ethnically, and regionally diverse of the Continental Army’s regiments—a distinction that makes it an apt reflection of the union that was struggling to create a nation.

The 2nd Canadian, like the larger army, represented and pushed the transition from a colonial, continental alliance to a national association. The problems the regiment raised and encountered underscored the complications of managing a confederation of states and troops.

In this enterprising study of an intriguing and at times “infernal” regiment, Holly A. Mayer marshals personal and official accounts—from the letters and journals of Continentals and congressmen to the pension applications of veterans and their widows—to reveal what the personal passions, hardships, and accommodations of the 2nd Canadian can tell us about the greater military and civil dynamics of the American Revolution. Congress’s Own follows congressmen, commanders, and soldiers through the Revolutionary War as the regiment’s story shifts from tents and trenches to the halls of power and back.

Interweaving insights from borderlands and community studies with military history, Mayer tracks key battles and traces debates that raged within the Revolution’s military and political borderlands wherein subjects became rebels, soldiers, and citizens. Her book offers fresh, vivid accounts of the Revolution that disclose how “Congress’s Own” regiment embodied the dreams, diversity, and divisions within and between the Continental Army, Congress, and the emergent union of states during the War for American Independence.

BOOK PURCHASE: To purchase this book please click on this link https://www.amazon.com/Congresss-Own-Continental-Campaigns-Commanders/dp/080616851X

About Dr. Holly A. Mayer

Holly A. Mayer is Professor Emerita of History at Duquesne University in Pittsburgh and the author of Belonging to the Army: Camp Followers and Community during the American Revolution. Holly A. Mayer is an historian of early America. She taught at Duquesne for decades enlightened by many super students and colleagues. Her positions included History Department chair between 2007 and 2013 and Interim Associate Provost for Academic Affairs from 2017 to 2019. Dr. Mayer was also the visiting Harold K. Johnson Chair of Military History at the U.S. Army War College, Carlisle Barracks, Pennsylvania, in 2016-2017.

She continues to be actively engaged with history as a researcher, editor, and author. Her primary interests include the social, cultural, and military histories of late eighteenth-century North America.