The speaker for this meeting is Christian McBurney. He’ll be speaking about his 2020 book, George Washington’s Nemesis: The Outrageous Treason and Unfair Court-Martial of Major General Charles Lee during the Revolutionary War. 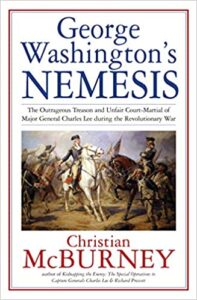 After Lee rejoined the Continental Army, he was given command of many of its best troops with orders from Washington to attack the rear of British General Henry Clinton’s column near Monmouth, New Jersey. Lee intended to attack on June 28, 1778, but retreated in the face of Clinton’s bold move to reverse his march. Two of Lee’s subordinate generals—without orders and without informing Lee—moved more than half of his command off the field. Faced with the possible destruction of the balance, Lee ordered a general retreat while conducting a skillful delaying action.
Many historians have been quick to malign Lee’s performance at Monmouth, for which he was convicted by court-martial for not attacking and for retreating in the face of the enemy. This was a miscarriage of justice, stresses McBurney, for the evidence clearly shows that Lee was unfairly convicted and had, in fact, by retreating, performed an important service to the Patriot cause. The guilty verdict was more the result of Lee’s having insulted Washington, which made the matter a political contest between the army’s two top generals—only one of them could prevail.

BOOK PURCHASE: To purchase this book please click on this link:  https://www.amazon.com/George-Washingtons-Nemesis-Outrageous-Revolution/dp/1611214653

Christian McBurney has written five books on the American Revolutionary War, including Kidnapping the Enemy: The Special Operations to Capture Generals Charles Lee & Richard Prescott. His published articles include one in MHQ: The Journal of Military History, on the British attempt to abduct George Washington, which was nominated by the U.S. Army Historical Foundation as best magazine article for 2017. He also publishes Rhode Island’s leading history blog. He is an attorney in Washington, D.C.