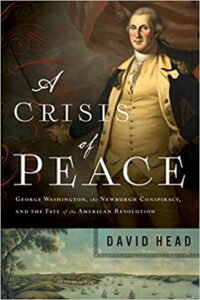 The speaker for this meeting is David Head.  He’ll be speaking about his 2019 book, A Crisis of Peace: George Washington, the Newburgh Conspiracy, and the Fate of the American Revolution. This book won the ARRTOP 2020 Honorable Mention Book Award

In the war’s waning days, the American Revolution neared collapsed when Washington’s senior officers were rumored to be on the edge of mutiny.

After the British surrender at Yorktown, the American Revolution blazed on—and as peace was negotiated in Europe, grave problems surfaced at home. The government was broke and paid its debts with loans from France. Political rivalry among the states paralyzed Congress. The army’s officers, encamped near Newburgh, New York, and restless without an enemy to fight, brooded over a civilian population indifferent to their sacrifices.

The result was the so-called Newburgh Conspiracy, a mysterious event in which Continental Army officers, disgruntled by a lack of pay and pensions, may have collaborated with nationalist-minded politicians such as Alexander Hamilton, James Madison, and Robert Morris to pressure Congress and the states to approve new taxes and strengthen the central government.

A Crisis of Peace tells the story of a pivotal episode of George Washington’s leadership and reveals how the American Revolution really ended: with fiscal turmoil, out-of-control conspiracy thinking, and suspicions between soldiers and civilians so strong that peace almost failed to bring true independence.

BOOK PURCHASE: To purchase this book please click on this link: https://www.amazon.com/Crisis-Peace-Washington-Conspiracy-Revolution/dp/1643130811

David Head teaches history at the University of Central Florida in Orlando. Originally from Western New York, he received his B.A. in history

An expert in maritime history, pirates, and privateers as well as the American Revolution and the Founding Fathers, David has published four books, including two as author and two as editor. His work has been honored by Mystic Seaport Museum, the Society for Historians of the Early American Republic, and the Maryland Historical Society, and his research has been supported, most recently, by the National Endowment for the Humanities and by George Washington’s Mount Vernon.

David lives in Orlando with his wife and three children and enjoys visits to Disney World. His superpower is grading papers while little girls climb on him.