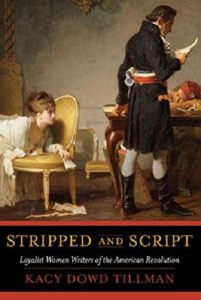 Female loyalists occupied a nearly impossible position during the American Revolution. Unlike their male counterparts, loyalist women were effectively silenced—unable to officially align themselves with either side or avoid being persecuted for their family ties. In this book, Kacy Dowd Tillman argues that women’s letters and journals are the key to recovering these voices, as these private writings were used as vehicles for public engagement. Through a literary analysis of extensive correspondence by statesmen’s wives, Quakers, merchants, and spies, Stripped and Script offers a new definition of loyalism that accounts for disaffection, pacifism, neutralism, and loyalism-by-association. Taking up the rhetoric of violation and rape, this archive repeatedly references the real threats rebels posed to female bodies, property, friendships, and families. Through writing, these women defended themselves against violation, in part, by writing about their personal experiences while knowing that the documents themselves may be confiscated, used against them, and circulated.