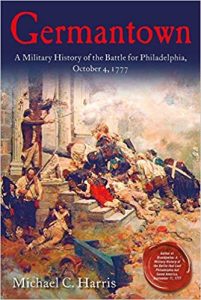 Today, Germantown is a busy neighborhood in Philadelphia. On October 4, 1777, it was a small village on the outskirts of the colonial capital whose surrounding fields and streets witnessed one of the largest battles of the American Revolution. The bloody battle represented George Washington’s attempt to recapture Philadelphia, but has long been overshadowed by better-known events like Brandywine, Saratoga, and Valley Forge. Award-winning author Michael C. Harris’s impressive Germantown: A Military History of the Battle for the Control of Philadelphia, October 4, 1777, elevates this important action from obscurity in the first full-length study of this pivotal engagement.   General Sir William Howe launched his campaign to capture Philadelphia in late July 1777, with an army of 16,500 British and Hessian soldiers aboard a 265-ship armada sailing from New York. Six difficult weeks later, Howe’s expedition landed near Elkton, Maryland, and moved north into Pennsylvania. Washington’s rebel army did all it could to harass Howe and fought and lost a major battle at Brandywine on September 11. Philadelphia fell to the British.  On October 4, obscured by darkness and a heavy morning fog, Washington launched a surprise attack on the British garrison at Germantown. His early attack found initial success and drove the British legions before him. The recapture of the colonial capital seemed within Washington’s grasp until poor decisions by the American high command brought about a reversal of fortune and a clear British victory. Like Brandywine, however, the bloody fight at Germantown proved that Continental soldiers could stand toe-to-toe with British Regulars. The Battle of Germantown began a protected quasi-siege of the British garrison in Germantown prior to the travails soon to come that winter at Valley Forge.  Harris’s Germantown is the first complete study to merge the strategic, political, and tactical history of this complex operation and important set-piece battle into a single compelling account. Following up on his award-winning Brandywine, Harris’s sweeping prose relies almost exclusively on original archival research and a deep personal knowledge of the terrain. Complete with original maps, numerous illustrations, and modern photos, and told largely through the words of those who fought there, Germantown: A Military History of the Battle for the Control of Philadelphia, October 4, 1777 is sure to please the most discriminating reader and assume its place as one of the finest military studies of its kind.

Book Purchase: To purchase this book please click on this link: https://www.amazon.com/Germantown-Military-History-Philadelphia-October/dp/1611215196

Michael C. Harris is a graduate of the University of Mary Washington and the American Military University. He has worked for the National Park Service in Fredericksburg, Virginia, Fort Mott State Park in New Jersey, and the Pennsylvania Historical and Museum Commission at Brandywine Battlefield. He has conducted tours and staff rides of many east coast battlefields. Michael is certified in secondary education and currently teaches in the Philadelphia region. He lives in Pennsylvania with his wife Michelle and son Nathanael.

The ARRTOP board has decided to return to in-person meetings (targeting October for our first in-person meeting).   In evaluating potential venues, the board primarily considered:  1) ability to accommodate 50 to 70 people, 2) food and drink service   3) room logistics and 4) location.

After a large search of the area, we have narrowed our choices to these 2 venues:  Scoogis and Stone & Key Cellars

Scoogis would be a return to our previous venue in the same room. We would have to switch our meeting night from Monday to Wednesday since they are currently closed on Monday and Tuesday.   Additional info (www.scoogis.com)

Pro’s:  1) Full Service Resturant  2) They have Heating/Air Conditioning 3) Much wider menu options  4) A/V Equipment would be there

Stone and Key Cellars is a winery and cidery which offers a selection of the wines, local microbrewing beer and Stone and Key Cellars/Boylan Bottling Company non-alcoholic drinks. They are open on Monday with a limited food menu.  Their room is much larger but with no servers.  They also have no HVAC equipment, but have fans and portable heaters.    (photos available on their Facebook page.  They are located at 435 Doylestown Rd in Montgomeryville.  Additional info (www.facebook.com/StoneAndKey , http://stoneandkeycellars.com )

Cons’s:  1) Not a full service resturant   2) No Heating/Air Conditioning (but they have fans and heaters)  3) Limited menu options  4) We would need to invest in new A/V Equipment

The Board invites you to provide us your thoughts on these venues prior to September 15 and submit your comments.

As always, your support of ARRTOP is greatly appreciated and we look forward to our long-awaited return to in-person meetings 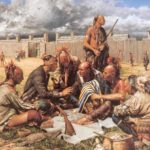 In Frontier Country, Patrick Spero addresses one of the most important and controversial subjects in American history: the frontier. Countering the modern conception of the American frontier as an area of expansion, Spero employs the eighteenth-century meaning of the term to show how colonists understood it as a vulnerable, militarized boundary. The Pennsylvania frontier, Spero argues, was constituted through conflicts not only between colonists and Native Americans but also among neighboring British colonies. These violent encounters created what Spero describes as a distinctive “frontier society” on the eve of the American Revolution that transformed the once-peaceful colony of Pennsylvania into a “frontier country.”

Join us on Monday, February 26, 2018 as we welcome Patrick Spero who will talk about his book Frontier Country.   Our meeting place is now Scoogi’s Italian Restaurant at 738 Bethlehem Pike in Flourtown.  Feel free to arrive early and eat in the back room where our meetings are held.  A short business meeting will start around 7:15pm. The presentation will start at 7:30pm. We encourage you to join our membership for the very small and reasonable tax deductible amount of $25.

Spero narrates Pennsylvania’s story through a sequence of formative but until now largely overlooked confrontations: an eight-year-long

border war between Maryland and Pennsylvania in the 1730s; the Seven Years’ War and conflicts with Native Americans in the 1750s; a series of frontier rebellions in the 1760s that rocked the colony and its governing elite; and wars Pennsylvania fought with Virginia and Connecticut in the 1770s over its western and northern borders. Deploying innovative data-mining and GIS-mapping techniques to produce a series of customized maps, he illustrates the growth and shifting locations of frontiers over time. Synthesizing the tensions between high and low politics and between eastern and western regions in Pennsylvania before the Revolution, Spero recasts the importance of frontiers to the development of colonial America and the origins of American Independence.

Patrick Spero is the Librarian and Director of the American Philosophical Society Library in Philadelphia. As a scholar of early American history, Dr. Spero specializes in the era of the American Revolution. He has published over a dozen essays and reviews on the topic. His is the author of Frontier Country: The Politics of War in Early Pennsylvania and The American Revolution Reborn: New Perspectives for the Twenty-First Century, an edited anthology also from Penn Press. For more information on Dr. Spero’s work, visit www.patrickspero.com.

A specialist in early American history, Dr. Spero previously taught at Williams College where he served as an assistant professor of History and Leadership Studies and received recognition for his integration of new technology in the classroom. Prior to his position at Williams, Dr. Spero held the position of Historian at the David Library of the Revolution and served on their Board of Trustees. He received his Ph.D. from the University of Pennsylvania in 2009 and has held long-term fellowships from the McNeil Center for Early American Studies, the Society of the Cincinnati, the Doris Quinn Foundation, the David Library of the American Revolution, and the American Philosophical Society.