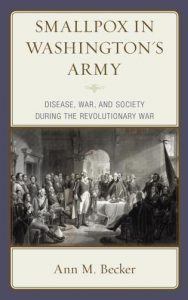 In Revolutionary America: Washington’s Army, Disease and Society, the author argues that smallpox played an integral role in military affairs for both the British and Continental armies, and impacted soldiers and civilians throughout the War for American Independence. Due to the Royal army’s policy of troop inoculation and because many British soldiers were already immune to the variola virus, the American army was initially at a disadvantage. Most American colonists were highly susceptible to this dreaded disease, and its presence was greatly feared. General George Washington was keenly aware of this disadvantage and, despite his own doubts, embarked on a policy of inoculation to protect his troops. Use of this controversial, innovative, and effective medical procedure leveled the playing field within the armies. However, by 1777, smallpox spread throughout America as soldiers interacted with civilian populations. Once military action moved south, American and British auxiliary troops and the enslaved Southern population all succumbed to the disease, creating a disorderly, dangerous situation as the war ends. Washington’s implementation of isolation policies as well as mass troop inoculation removed the threat of epidemic smallpox and ultimately protected American soldiers and civilians from the dangers of this much feared disease.

Book Purchase: To purchase this book please click on this link: https://www.amazon.com/dp/1793630690

About Ann M. Becker: Ann M. Becker is a Professor at SUNY Empire State College, and received her doctorate from Stony Brook University.  Dr. Becker has presented at numerous academic conferences, including the New England Historical Association and the American Historical Association, and has published two photo history books about communities on Long Island, and one on Stony Brook University’s history. Her article, “Smallpox in Washington’s Army: the Strategic Implications of the Disease during the American Revolutionary War,” appeared in the Journal of Military History in 2004, and “Smallpox at the Siege of Boston: “Vigilance against this most dangerous Enemy,” appeared in the Winter 2017 issue of the Historical Journal of Massachusetts and “The Revolutionary War Pension Act of 1818″ was published in 2019 by the same journal,. Her book, Smallpox in Washington’s Army: Disease, War, and Society during the Revolutionary War, is forthcoming from Lexington Books, a division of Rowman and Littlefield.