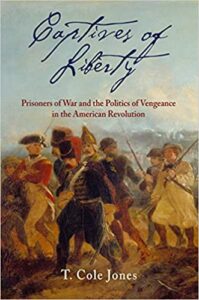 The speaker for this meeting is T. Cole Jones. He’ll be speaking about his 2019 book, Captives of Liberty: Prisoners of War and the Politics of Vengeance in the American Revolution.

Contrary to popular belief, the American Revolutionary War was not a limited and restrained struggle for political self-determination. From the onset of hostilities, British authorities viewed their American foes as traitors to be punished, and British abuse of American prisoners, both tacitly condoned and at times officially sanctioned, proliferated. Meanwhile, more than seventeen thousand British and allied soldiers fell into American hands during the Revolution. For a fledgling nation that could barely afford to keep an army in the field, the issue of how to manage prisoners of war was daunting.

Captives of Liberty examines how America’s founding generation grappled with the problems posed by prisoners of war, and how this influenced the wider social and political legacies of the Revolution. When the struggle began, revolutionary leadership strove to conduct the war according to the prevailing European customs of military conduct, which emphasized restricting violence to the battlefield and treating prisoners humanely. However, this vision of restrained war did not last long. As the British denied customary protections to their American captives, the revolutionary leadership wasted no time in capitalizing on the prisoners’ ordeals for propagandistic purposes. Enraged, ordinary Americans began to demand vengeance, and they viewed British soldiers and their German and Native American auxiliaries as appropriate targets. This cycle of violence spiraled out of control, transforming the struggle for colonial independence into a revolutionary war.

In illuminating this history, the violence of the Revolutionary War had a profound impact on the character and consequences of the American Revolution. Captives of Liberty not only provides the first comprehensive analysis of revolutionary American treatment of enemy prisoners but also reveals the relationship between America’s political revolution and the war waged to secure it. 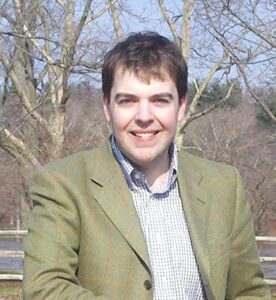 T. Cole Jones completed a BA in History at Duke University and a PhD in Early American History at Johns Hopkins University. He specializes in Colonial and revolutionary America, the Atlantic world, the cultural history of violence, and war and society. Prior to joining the Purdue faculty, he was the Hench Post-Dissertation Fellow at the American Antiquarian Society and the National Endowment for the Humanities fellow at the New-York Historical Society.

Jones’ first book, “Captives of Liberty: Prisoners of War and the Politics of Vengeance in the American Revolution,” was published in the University of Pennsylvania Press Early American Studies Series in 2020. By examining American treatment of enemy prisoners, this study reveals the factors that coalesced to transform a war for independence into a revolutionary struggle. His next book, “Loyalist Rising: The Battle of Moore’s Creek Bridge,” is under contract with Westholme Press. In addition to this project, he is currently at work on a study of the western theater of the American Revolutionary War provisionally entitled, “Patrick Henry’s War: The Struggle for Empire in the Revolutionary West.”

Jones has published articles in the New England Quarterly, the Journal of the Early Republic, the Journal of Military History, and Common-Place. He contributed a chapter to “Justifying Revolution: Law, Virtue, and Violence in the American War of Independence,” edited by Glenn Moots and Philip Hamilton. His research has been supported by the Harry Frank Guggenheim Foundation, the United States Army Center of Military History, and the Fred W. Smith National Library for the Study of George Washington at Mount Vernon, among others.