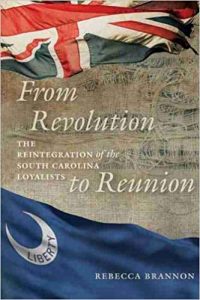 The American Revolution was a vicious civil war fought between families and neighbors. Nowhere was this truer than in South Carolina. Yet, after the Revolution, South Carolina’s victorious Patriots offered vanquished Loyalists a prompt and generous legal and social reintegration. From Revolution to Reunion investigates the way in which South Carolinians, Patriot and Loyalist, managed to reconcile their bitter differences and reunite to heal South Carolina and create a stable foundation for the new United States to become a political and economic leader.

Rituals and emotions, as well as historical memory, produce a complex and nuanced interpretation of the reconciliation process in post-Revolutionary South Carolina, detailing how Loyalists and Patriots worked together to heal their society. We need to frame the process in a larger historical context by comparing South Carolina’s experience with that of other states.

Loyalists apologized but also went out of their way to serve their neighbors and to make themselves useful, even vital, members of the new experiment in self-government and liberty ushered in by the Revolution. Loyalists built on existing social ties to establish themselves in the new Republic, and they did it successfully.

By 1784 the state government reinstated almost all the Loyalists who had stayed, as the majority of Loyalists had reinscribed themselves into the postwar nation. South Carolinians went on to manipulate the way they talked about Loyalism in public to guarantee that memories would not be allowed to disturb the peaceful reconciliation they had created. South Carolinians succeeded in creating a generous and lasting reconciliation between former enemies, but in the process they unfortunately downplayed the dangers of civil war—which may have made it easier for South Carolinians to choose another civil war.

Rebecca Brannon is an Associate Professor of History and Interdisciplinary Liberal Studies at James Madison University in Harrisonburg,

Virginia.  When not teaching or researching at a university named for the Father of the Constitution, she enjoys the area’s local craft breweries, diverse people, and wines and cheeses from around the world.  She lives in downtown Harrisonburg with her spouse and children.

Her academic research focuses on eighteenth-century American history and is concerned with broad questions about the American Revolution and the transition to modernity in the period.  We are often tempted to portray the transition to modern ways of organizing the world as elegant and completely embraced, yet in fact as all her research shows, it was halting, disjointed, and sometimes deeply painful for the people going through it.  Modernity was not self-evidently superior to the people who found themselves grappling with immense change.