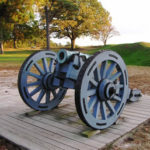 Benjamin Franklin was serious when he suggested the colonists arm themselves with the longbow. The American colonies were not logistically prepared for the revolution and this became painfully obvious in war’s first years. Trade networks were destroyed, inflation undermined the economy, and American artisans could not produce or repair enough weapons to keep the Continental Army in the field. The Continental Congress responded to this crisis by mobilizing the nation’s manufacturing sector for war. With information obtained from Europe through both commercial exchange and French military networks, Congress became familiar with the latest manufacturing techniques and processes of the nascent European industrial revolution. They therefore initiated an innovative program of munitions manufacturing under the Department of the Commissary General of Military Stores. The department gathered craftsmen and workers into three national arsenals where they were trained for the large-scale production of weapons. The department also engaged private manufacturers, providing them with materials and worker training, and instituting a program of inspecting their finished products.

Join us on Monday, November 27th, 2017 as we welcome Robert F Smith who will speak on his book Manufacturing Independence: Industrial Innovation in the American Revolution.  Our meeting place is now Scoogi’s Italian Restaurant at 738 Bethlehem Pike in Flourtown.  Feel free to arrive early and eat in the back room where our meetings are held.  A short business meeting will start around 7:15pm. The presentation will start at 7:30pm. We encourage you to join our membership for the very small and reasonable tax deductible amount of $20. 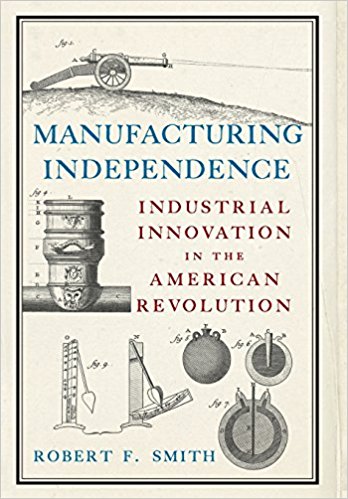 As historian Robert F. Smith relates in Manufacturing Independence: Industrial Innovation in the American Revolution, the colonies were able to provide their military with the arms it needed to fight, survive, and outlast the enemy—supplying weapons for the victory at Saratoga, rearming their armies in the South on three different occasions, and providing munitions to sustain the siege at Yorktown. But this manufacturing system not only successfully supported the Continental Army, it also demonstrated new production ideas to the nation. Through this system, the government went on to promote domestic manufacturing after the war, becoming a model for how the nation could produce goods for its own needs. The War for Independence was not just a political revolution, it was an integral part of the Industrial Revolution in America.

ROBERT F. SMITH is Assistant Dean for Humanities and Social Sciences at Northampton Community College. He received his PhD in Early American History and Technology from Lehigh University and his MA in American History from Villanova University. He is the author of numerous articles on military history and the history of technology. This is his first book.